The vice-ministerial talks began at around 10:40 a.m. at a joint industrial complex in the North's border city of Kaesong as part of efforts to implement an inter-Korean deal in August on defusing tension.

The agenda for the talks has not been revealed publicly, but the rival Koreas are likely to discuss various pending issues including the reunions of families torn apart by the 1950-53 Korean War and the resumption of a suspended joint tour program.

"We hope that various pending issues could be discussed smoothly through consultation," Vice Unification Minister Hwang Boo-gi, Seoul's chief delegate, said at the start of the talks.

Jon Jong-su, the North's chief negotiator, called for mutual efforts to bring warmth to the icy relations between the two Koreas. 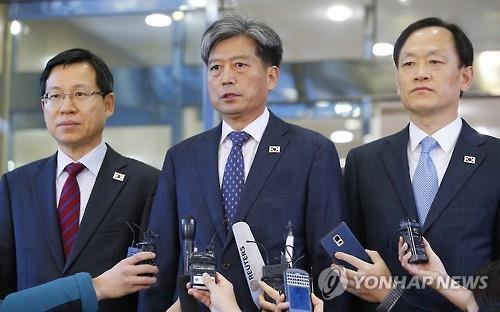 Vice Unification Minister Hwang Boo-gi (C) speaks to reporters at the Headquarters of Inter-Korean Dialogue in Seoul on Dec. 11, 2015, before leaving for North Korea's border city of Kaesong for high-level talks with North Korea. (Yonhap)

Holding the high-level talks is a key element of the inter-Korean agreement on Aug. 25 to ease tension and promote more civilian exchanges following a DMZ land-mine explosion blamed on the North. Two South Korean soldiers were maimed.

The August agreement set the stage for the two Koreas to sit down for the talks, but experts said that a major breakthrough may not be likely, given a sharp division of their stances over key contentious issues.

South Korea has placed top priority on resolving the issue of separated families as time is running out for the surviving 66,000 family members in South Korea, most of which are over 80.

The two Koreas held another round of family reunions in October at a mountain resort on the North's east coast as part of the August deal. Seoul has called for holding separated family reunions on a regular basis, but Pyongyang maintains a lukewarm stance.

Meanwhile, North Korea is likely to reiterate its call for the South to resume a joint tour program at Mount Kumgang in the North, which has been suspended since 2008, following the shooting death of a South Korean tourist.

Pyongyang has repeatedly pressed Seoul to reopen the tour program in an apparent move to earn hard currency.

But the South has said that North Korea should take measures to guarantee the safety of South Korean visitors at the mountain and ensure that similar incidents do not recur.

The North is currently under U.N. sanctions banning nuclear tests and missile launches. Seoul has also imposed its own punitive sanctions on the North following North Korea's sinking of a South Korean warship in 2010.