Japan and South Korea have removed the biggest obstacle to better bilateral ties after agreeing to “finally and irreversibly” resolve Tokyo’s use of tens of thousands of Korean women as wartime sex slaves.

In a breakthrough that barely seemed possible a few months ago, Japan’s prime minister, Shinzo Abe, offered his “most sincere apologies” to the women in a statement issued in Seoul by his foreign minister, Fumio Kishida .

It was not immediately clear if Abe would send a letter of apology to each surviving “comfort woman”.

Later Monday, Abe called the South Korean president, Park Geun-hye , who has described the sex slave row as “the biggest obstacle” to improved ties with Tokyo, and reiterated his apology.

He told reporters that the agreement was based on his commitment to stop future generations from having to repeatedly apologise. “Japan and South Korea are now entering a new era. We should not drag this problem into the next generation.”

Park issued a separate statement saying the deal was the result of her government’s best efforts to resolve the sex slave issue. “I hope the mental pains of the elderly comfort women will be eased,” she said.

Japan also offered to set up a new 1bn yen (£5.6m) fund, with the money, paid directly by the government, divided among the 46 former comfort women still alive, most of whom are in their late 80s and early 90s. 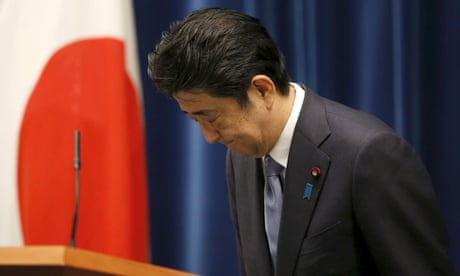 Speaking after make-or-break talks with his South Korean counterpart, Yun Byung-se, Kishida heralded a new era of better relations between the two countries, whose strong trade ties and military alliances with the US have been overshadowed by the controversy.

“This marks the beginning of a new era of Japan-South Korea ties,” he told reporters. “I think the agreement we reached is historic and is a groundbreaking achievement.

“[Abe] expresses anew his most sincere apologies and remorse to all the women who underwent immeasurable and painful experiences and suffered incurable physical and psychological wounds as comfort women.”

The Japanese government also conceded that its military authorities played a role in the sexual enslavement of the women. While avoiding any admission of legal responsibility, Kishida’s statement said: “The issue of comfort women, with an involvement of the Japanese military authorities at that time, was a grave affront to the honour and dignity of large numbers of women, and the government of Japan is painfully aware of responsibilities from this perspective.”