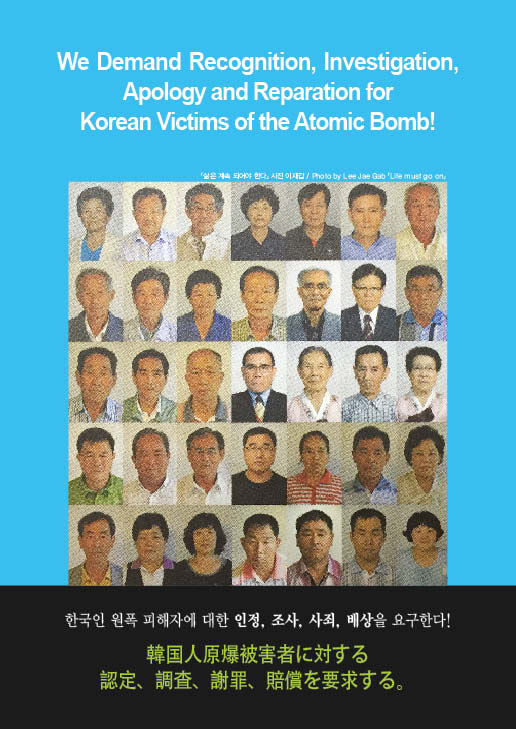 We Demand Recognition, Investigation, Apology and Reparation for Korean Victims of the Atomic Bomb!

We urge that on your upcoming trip to Hiroshima, you first visit the monument dedicated to innocent Korean atomic bomb victims - forcibly conscripted to Japan by the Japanese colonial government then killed in the U.S. bombing of Hiroshima - and offer an apology.

Koreans comprise the second largest number of nuclear bomb victims. 70,000 to 100,000 Koreans (1/10 of the number of Japanese victims) were bombed, and 50,000 of them died (1/6 of the number of Japanese who died). Of the 50,000 Korean survivors of the atomic bomb, 43,000 returned to South Korea, but we and our children faced poverty, discrimination and neglect from the international community as well as our own government. Although we suffer from the long-term effects of radiation exposure, many died without receiving proper treatment. What’s more heartbreaking is that our children continue to battle terrifying illnesses, but there is still no official recognition of the hereditary nature of radiation exposure.

As the whole world knows, the United States, fully aware of the horrific crime it was about to commit against humanity, developed the first nuclear bomb and dropped it on innocent people.  Even now, we cannot suppress our outrage at the inhumane nature of U.S.’ action, not just aimed at soldiers or military facilities but an indiscriminate decimation of civilians, men and women, young and old, on their way to work.

We urge your cooperation in publicizing information and documents related to Korean victims of the atomic bomb and implementing a comprehensive investigation to uncover the truth. As of 2015, only 2,584 Korean victims were registered members of the Association of Korean Atomic Bomb Victims. Our very existence is testimony to the horror of nuclear war, but our average age is 80 years.  In a few more years, we may all be dead.

We live out the last days of our lives wondering, “Is the United States simply waiting for all the victims to die? Does it want all evidence of the damage caused by the atomic bombs obliterated?” We urge the United States to acknowledge and investigate the damage caused by its use of the atomic bomb and offer an apology and reparation before it’s too late.

Korean atomic bomb survivors and their descendants are living witnesses to the painful history of Japanese colonial occupation, as well as war and nuclear destruction.

We hope that your visit to Hiroshima will not be used to further the Abe government’s intention of painting Japan merely as a victim and evading responsibility for its past imperialist war and colonial rule. We hope that your visit to Hiroshima will be a time for sincere introspection and apology to atomic bomb victims around the world, including Japan and Korea, and an opportunity to declare to people in the United States and around the world that nuclear weapons shall never again be used against humanity. On behalf of all atomic victims, we urge you from the bottom of our hearts to take the lead in realizing a “world without nuclear weapons” by stopping the modernization of nuclear weapons and focusing the remaining days of your administration to outlawing and reducing nuclear weapons towards eventual total disarmament.

May 12, 2016
All Members of the Association of Korean Atomic Bomb Victims