"No to increasing the defense budget! No to the purchase of the Patriot missiles!"

"We denounce the Ministry of National Defense (MND) for demanding a large increase in the defense budget. The MND claims that this increase is necessary for self-defense. In fact, it will support the expanded regional role of the US Forces in Korea. " 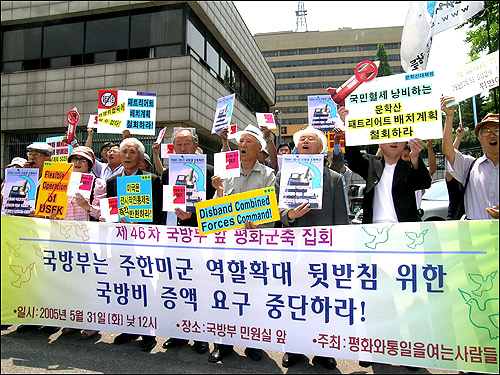 SPARK held its 46th peace/disarmament monthly rally at the MND building at noon on May 31. This rally was called to 'denounce the MND's demand for a huge increase in the defense budget'. In spite of the hot weather, a crowd of more than 40 peace activists waved signs and chanted enthusiastically, "No to increasing the defense budget! No to the purchase of the Patriot missiles!".

Lee Hee-Hwan, executive director of Citizens' Committee against the Deployment of Patriot Missiles at Mt. Munhak (in Inchon, west of Seoul), reported : "The MND is planning to deploy 48 Patriot missiles in the greater Seoul metropolitan area including Mt. Munhak, saying that the missiles are required to defend the metropolitan area from potential attack by North Korean military aircraft. In fact the installation of the Patriots is part of the US' missile defense system directed against NK and China. We are opposed to deploying the missiles not because of the 'Not In My Back Yard' syndrome but because it endangers peace on the Korean peninsula and in Northeast Asia." 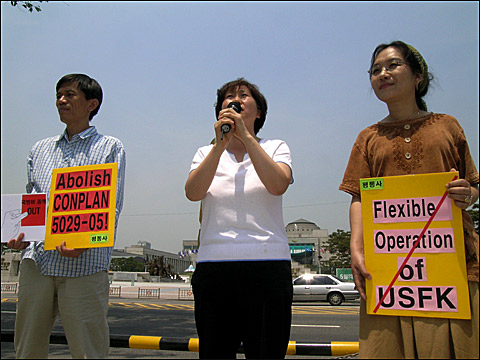 SPARK delegates who participated in the 7th NPT Review Conference from 27 Apr. to 12 May in New York reported :
"This RevCon failed in terms of the lack of a final agreement to reinforce the NPT regime. And its failure is mainly due to America's unilateral attitude. The US even refused to honor the commitments that it made to the previous agreements such as the 1995 and 2000 RevCons' resolutions. Therefore, it is the civic peace activists, instead of the governments, who can promote nuclear disarmament."