The 69th anti-US joint rally was held in the park near the US embassy at 2:00 pm on June 14. The rally is held on the second Tuesday of every month. This month's rally began with an offering of flowers, in commemoration of two middle-school girls who were run over by a US Army armored vehicle on June 13, 2002. One by one, representatives of the participants placed flowers on the altar in front of a photograph of the two girls. 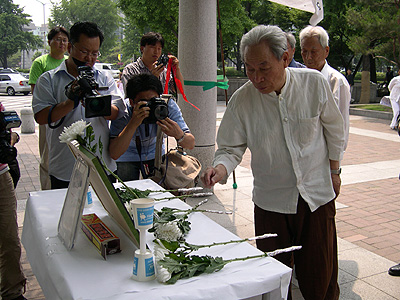 Reveal the truth about the accident and punish the commanders !

Kim Jong-il, general secretary of SPARK, said, "SPARK and the girls' families have been trying to obtain the documents relating to this case, using the Freedom of Information Law. Following the judgement issued by the Korean Supreme Court  in late May this year, we finally obtained the copies of the documents of the investigation conducted by the Prosecutor's Office and the US Army Criminal Investigation Department. According to the records, the court-martial committed a serious error when they acquitted the vehicle's driver and navigator. Moreover, the documents revealed that the commander should have warned the troops that there were pedestrians on the road, so that the accident could have been prevented. Therefore we strongly urge the US government to tell the truth about the accident and prosecute the commanders."

We are opposed to ConPlan 5029 because of its aggressiveness.

Yoo Yong-jae, director of SPARK's anti-USFK division, firmly criticized the agreement between the South Korean and US ministers of defense to 'improve and develop' the concept of a US-led military contingency plan in the event of internal disorder in North Korea, code-named ConPlan 5029. He asserted, "It is a very dangerous plan in the sense that the US may wage war on NK not because of NK's invasion of SK but because of breakdown of internal order in NK caused by a natural disaster, revolt, mass flow of refugees, or regime collapse. So it must be abolished."

Kim Taek-gyun, general secretary of Paengsong Committee against Expansion of the US military Bases at Pyongtaek, said,

"I can never tolerate the conversion of my land into a military base." He held up a placard which said : "This was my ancestors' land in the past, it is my land in the present, and it will be my descendants' land in the future. I will keep the land at all costs." He appealed to the participants in the rally to take part in the huge march in Paengsong County on July 10 to protest against the expansion of the US bases. 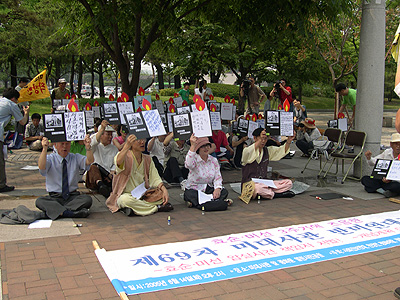