We urge the Ministry of National Defense (MND) to wholly rewrite the complete 2006 -- 2009 medium-term defense plan which aggravates inter-Korean confrontation and hinders peaceful reunification, and to lead the way to disarmament. The 47th Peace/Disarmament Rally                               June 28, 2005Although it was as hot as mid-summer, there were plenty of energetic peace activists who defied the heat and humidity -- SPARK members, to be precise. They always gather on the last Tuesday of every month in front of the MND building to demonstrate for peace and disarmament. Nearly 50 demonstrators waved blue signs in the shape of the Korean peninsula, which said, "Welcome inter-Korean talks! Stop the increase in military spending! Initiate disarmament talks!" 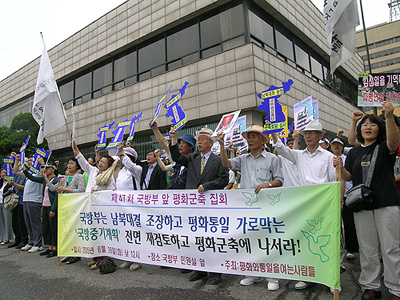 Park Seok-boon, general affairs director of SPARK, was the first speaker in the rally. She welcomed the 12-point economic/humanitarian agreements signed at the inter-Korean ministerial meeting (June 23), following a surprise meeting in Pyongyang between South Korean Unification Minister Chung Dong-young and North Korean leader Kim Jong-il (June 17). She especially emphasized the importance of resuming talks between military leaders as they could ease North-South military tensions.
However, she was very concerned that the MND's medium-term defense plan could damage the inter-Korean agreements. She said, "According to the medium-term defense plan, the MND will purchase high-tech weapons costing 54 trillion won (about billion) from 2006 to 2009. It should be a serious obstacle to the upcoming talks between military leaders. Therefore, I urge the MND to wholly rewrite the complete 2006 -- 2009 medium-term defense plan which makes inter-Korean confrontation worse and hinders peaceful reunification, and to lead the way to disarmament."

Choi Sun-hee, general director of Women Making Peace, argued, "Kim Son-il, who was kidnapped in Iraq, passed away a year ago. I am wondering whether we've forgotten him too soon. I denounce the defense minister for trying to keep our troops in Iraq for another year. Let's struggle enthusiastically to bring our soldiers home as soon as possible."

Lee Hee-hwan, executive director of the Citizens' Committee against the Deployment of Patriot Missiles at Mt. Munhak (in Inchon, west of Seoul), reported their activities in the past month. They sent open letters to the congressional and municipal representatives asking them whether they support the deployment of the missiles. In addition they held a citizens' peace walk and launched a campaign to collect 100,000 signatures for an anti-missile petition. 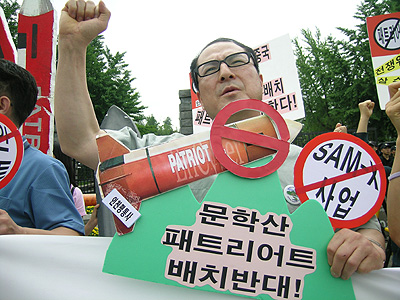